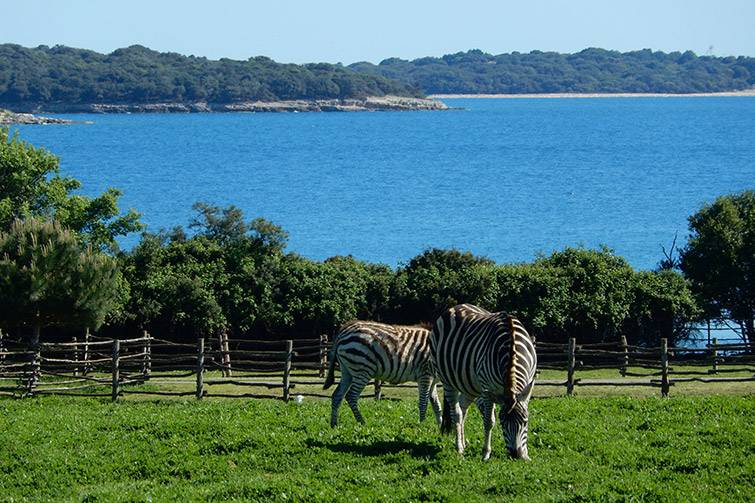 This is a hidden piece of paradise, an imposing archipelago which consists of 14 islands and 12 islets, separated from the Istrian coast by just a three kilometres long Fažana channel. The ideal destination for a trip if you hired a rent-a-car in nearby Pula and are looking for an unforgettable experience with a taste of nature.

Brijuni National Park enjoys it status from back in 1984, and they became world famous after World War II when it became the summer residence of President Tito, who in this 'Garden of Eden' in his White villa received distinguished officials from all over the world. Thanks to him, Brijuni got an open and exotic safari park, where many animal species roam free, among other things, uncommon in our region zebras, which Tito received as a gift, but also rabbits, bighorn sheep, delicate deer’s and luxurious peacocks, while the clear air flutters with over 200 species of wild birds.

The islands are covered with lush vegetation that impresses at every turn, and some trees, like ancient, dense olives, achieved such ripe old age they are now considered to be living monuments. You will be amazed by the diversity of plant species, more than a few hundred from all over the world, which are planted and nurtured, so they can be experienced in their most beautiful bloom.

For visitors two main islands are open, Mali Brijuni and Veli Brijuni, to which you can get by boat from Fažana, while the mysterious beauty of the park and secluded beaches can be explored on a bicycle, popular open electric cars, or, best of all romantic walk.

If adrenaline flows through your veins, waiting for you are tennis and newly renovated golf courses, but also dangerous roads for extreme sports, while lovers of art and tradition should certainly visit the archaeological museum, the church of St. Germana and 'the theater under the stars' Ulysses, which for the whole summer, in an ambient amphitheatre within the fortress walls, under the baton of the famous Rade Serbedzija, offers superb theatrical experience.

Have a nice trip and send us photos!